Unconditional Basic Income Europe (UBIE) is an international network of activists and initiatives. We advocate for the implementation of Basic Income in Europe and its recognition as a Universal Human Right.

UBIE was born out of the European Citizens’ Initiative for an Unconditional Basic Income in 2013/14, which gathered the support of over 300,000 EU citizens. Today, we connect over 400 active members from more than 30 countries across the continent.

We organise regular meetings in cities all over Europe, develop projects and campaigns to promote basic income, and raise public awareness as well as support among decision makers at European and national level. As a result of our efforts, basic income is now on the agenda in the policy debates of many European countries.

UBIE has been officially registered as an International Non-Profit Association (AISBL – Association internationale sans but lucratif ) in Brussels since July 2015. 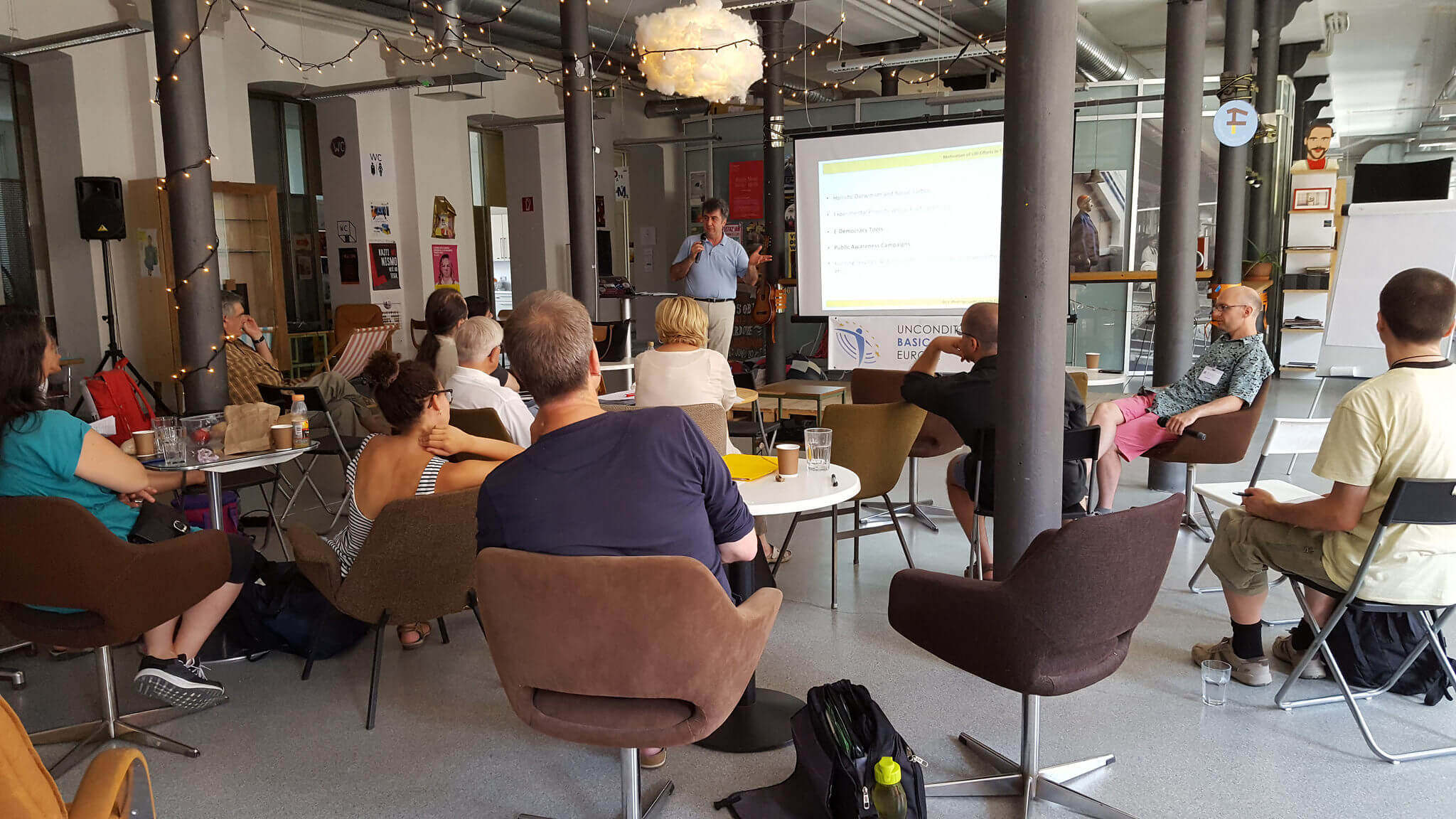 What is Unconditional Basic Income?

An Unconditional Basic Income (UBI) is an income unconditionally granted to all members of a political community on an individual basis, without means test or work requirement.

Unlike many existing minimum income schemes in European countries, UBI is universal, individual, unconditional, and high enough to ensure an existence that preserves personal dignity and allows an individual active participation in society:

Every person, irrespective of age, ethnicity, place of residence, profession etc. will be entitled to receive this allocation.

Everyone has the right to UBI on an individual basis as this is the only way to ensure privacy and to prevent control over other individuals. UBI will be independent of marital status, cohabitation or household configuration, or of the income or property of other household or family members.

As a human right UBI shall not depend on any preconditions, whether this be an obligation to take paid employment, to be involved in community service, or to behave according to traditional gender roles. Nor will it be subject to income, savings or property limits

The amount given should provide for a decent standard of living, one which meets society’s social and cultural standards in the country concerned. It should prevent material poverty and provide the opportunity to participate in society and to live in dignity.

We emphasize that UBI should not replace the compensatory welfare state but rather complete and transform it into an emancipatory welfare system.

Unconditional Basic Income (UBI) is an amount of money, paid on a regular basis to each individual unconditionally and universally, high enough to ensure a material existence and participation in society. UBI is a step towards an emancipatory welfare system.
UBIE’s goals are: the introduction of unconditional basic income throughout Europe; and in order for all to live in dignity, the recognition of UBI as a universal Human Right.
UBIE respects the diversity of views and opinions on unconditional basic income. Different justifications and methods of implementation shall not prevent us from cooperating.
UBIE respects individual or collective differences, such as, but not limited to: gender, race, sexuality, disability, religion, financial position, occupation, country and immigration status.

UBIE has a very simple structure with the aim of encouraging and facilitating joint, cross-border activities of its members. There is no hierarchy, ideas and opinions from all members count equal.

We only have two decision making bodies:

The General Assembly takes place at least once per year and makes all important decisions on UBIE’s direction. It decides about our strategy, our projects, and our budget. It also elects the five members of the board, which we call the “Core Group”. All members are invited to participate and can vote (after 1 month of membership). Individuals and organisations are equal and have one vote each.

The Core Group (board) coordinates the execution of the General Assembly’s decisions, takes care of UBIE’s daily operations, ensures its representation towards the general public and directs lobbying efforts. Its members are elected every two years in an election without candidates.

The story of UBIE begun with the European Citizens’ Initiative for Unconditional Basic Income (UBI) which was launched in 2013. This initiative – the first of its kind worldwide – collected over 300,000 signatures and involved more than 25 countries across the EU. It also triggered the creation of new groups promoting UBI in several European countries, including Greece, the United Kingdom (UK), Portugal, and Romania.

The preparation process of the European Citizen’s Initiative started in April 2012, with a first meeting organised in the European Parliament in Brussels. At the last meeting in Luxembourg (Dec 2013), the Committee decided unanimously to create a new formal organisation to keep up the momentum generated during the European Citizens’ Initiative and to build the movement further.

Another meeting took place in Brussels on February 17th, 2014 with organisers from 17 European countries including Norway. It was decided to name our organisation “Unconditional Basic Income Europe” (UBIE).

In July 2015 UBIE  was accepted as an AISBL (Association internationale sans but lucratif – International Non-Profit Organization) in Belgium and has been officially listed as such by the Belgian government.