Basic income after the elections in France and the UK 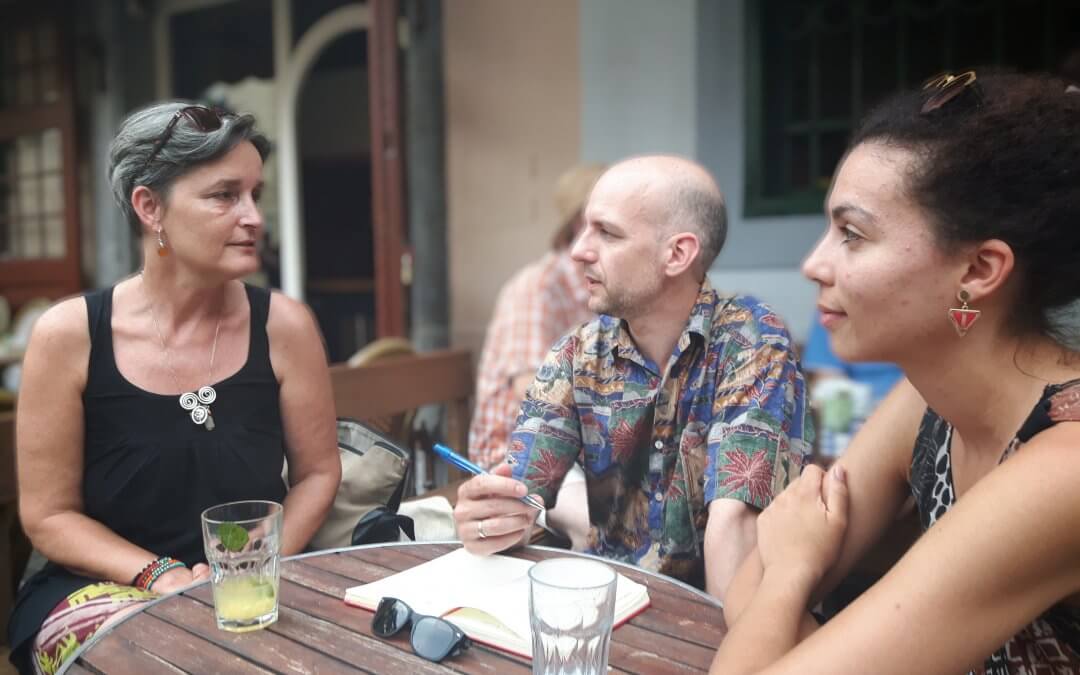 Two of Europe’s biggest countries, France and the United Kingdom, had elections this year, and both caused the continent hold its breath for a while. The first was anticipated anxiously for quite a while, whereas the second came out of the blue. Dániel Fehér, chair of UBIE, talked to Aurélie Hampel, UBIE board member and basic income activist from France, and Barb Jacobson, former chair of UBIE and coordinator of Basic Income UK about the implications of both elections for the basic income movement in Europe.

Dániel: While all of us were watching anxiously how France would respond to the populist challenge posed by Le Pen, something unexpected happened in the outgoing president’s Socialist Party: The outsider Benoit Hamon won the primaries with an explicit leftist agenda – and basic income. Aurélie, how did this change the perception of this issue in France?

Aurélie: When you start talking about basic income to French people these days, they go straight like “sure, the universal income proposed by Hamon”. For us this is the major outcome of this election: one of the main candidates promoted basic income as a central idea of his campaign and now everyone has heard about it. Whether they have a precise idea about it is a different question – still, it was a great opportunity to have a lot of discussion in all over France. Our basic income movement had lots of requests for lively  debates and organising events on the topic. Also because Hamon wasn’t the only candidate to have basic income in his programme.

In most parties with a primary process, one or two contenders were in favour of the idea, even if they did not play as prominent a role in the elections process as he did. Unfortunately, the Socialist Party did not manage to unite behind its official candidate or the basic income idea, they basically got wiped out in the elections and afterwards they split into different factions.

Aurélie: Definitely! Two million citizens voted in the primaries and he won mainly because the idea of basic income inspired especially young people. My little brother voted for the first time because he finally saw a candidate with a programme attractive for the youth and oriented towards the future. I know also other people who were receptive to Hamon’s proposal as well as his programme for environmental and social justice because they thought about their children’s future. But mainly because of the mess in his party, his campaign collapsed in the final weeks and in the first round he only scored 6% of the vote. Nevertheless, I find it still encouraging that he was brave enough to promote such an ambitious plan and was ready to pay the political price for it.

Dániel: Did his poor showing in the presidential elections also harm the idea of basic income?

Aurélie: I don’t think so. People can distinguish between the two. The huge media coverage about basic income during the campaign cannot be undone. Of course, they will talk less about it in the coming months, but most people will remember the discussions.

Dániel: Let’s move to the other side of the Channel, then. There the role of basic income in the UK snap elections was not that prominent like in France, given that even the parties that were looking into it before did not have sufficient time to to include plans for it in  their election manifestos. So how do you see it Barb, what is the level of political support from various political parties and what was your experience in the discussions with them ahead of the elections?

Barb: I have to say that the election kind of killed the discussion about basic income. Yes, the Green Party supports basic income – but except for the very beginning of the election they rarely talked about it. They also lost lots of votes as the fight became very polarized between Jeremy Corbyn and Theresa May, because most people felt that they really had to get as far as they could to get the Tories out.

As for Labour, it has to be said that Corbyn, whenever he has been asked about basic income over the last couple of years, has always been very polite and said that he wants to look into it. This is kind of nice, but it’s also obvious that his advisors are not so supportive – except for his shadow chancellor John McDonnell, who really likes the idea. That’s why a few months ago they started a promising inquiry into basic income and said they planned to bring the issue to the next party conference end of September. But then the election was called and that killed off this process – the only proposal going remotely in this direction in the Labour manifesto was free college tuition.

Dániel: And what’s the approach on the government’s side? Barb: The Tories have instituted a welfare reform called Universal Credit, which combines several benefits. That could have been a good thing, but at the same time they also introduced a lot of extra conditions for getting unemployment and disability benefits, and cut the tax credit element for people with low-paid jobs, so all in all their social policies have been an incredible disaster.

However, last autumn, the Tories, in a desperate attempt to make fracking acceptable, suggested that people in the areas affected should all receive some money directly from shale gas taxes. The way they presented it was a classic basic income argument about people needing security and being able to plan their lives. Obviously, we in Basic Income UK did not support this idea, because it was a bribe to accept an environmentally suicidal policy. It did show how powerful the anti-fracking case and organising has become. However, it seems possible that in near future the Tories could decide to dump Universal Credit and opt for a low level basic income, again as a bribe to get people to vote for them. Apparently, some of their MPs are interested in the concept, even though we don’t know who those are. Also, the new Tory mayor of the West Midlands [the area around Birmingham] – ironically the only candidate in the recent local election there who did not support Citizens UK’s suggestion to run a basic income pilot in the region – acknowledged that he is following the experiments in Finland and Ontario with great interest.

Dániel: If we look beyond Westminster and England, there is also an active debate in Scotland, about basic income…

Barb: That is an interesting one, indeed. The SNP, the Scottish Nationalist Party was basically pushed by the more radical movement around the independence referendum in 2014 into officially supporting basic income. But except for one or two of their very enthusiastic MPs, they did not really push the issue in the election campaign. On the local level, however, it’s different. Last December, the Glasgow city council decided to do a feasibility study into a basic income pilot in the city, (led by a Labour councillor there), Fife Council is also looking into doing one (led by a Conservative) and now apparently North Ayrshire. That’s very hopeful.

[UPDATE: Since this interview, the Scottish Parliament promised to support pilots in Scotland, and Edinburgh Council voted to look at doing one.]

Dániel: Now let’s get back to France where after the presidential elections a new parliament has also been elected. The results gave huge power to the new president Emmanuel Macron and his movement. What is their attitude to the basic income idea and do you see chances to work with them?

Aurélie: Yes, Macron’s En Marche and their liberal ally MoDem have 350 seats out of 577 in the lower chamber. Most of them are new faces, upper middle class people – independents, academics, business folks – without any previous political experience. So we have to talk to them and find out about their attitude towards basic income. On the other hand, we lost almost all the MPs that supported basic income. We hope that in September we will at least be able to retain the last member of the Senate who supports us, as the other one is not running again. So we will focus on pushing basic income pilot projects in the regions, for example on the island of Reunion that has already put forward a costed proposal, as well as on working with decision makers on the local and regional level. Dániel: Barb, would you dare to risk an outlook into the basic income movement’s future political chances in the UK?

Barb: Being from the left, I find it rather grim that the best prospect we can see at the moment is that the Tories bribe the electors with a partial basic income – although again I’m sure it will be minimal and will not be enough for most to live on… We don’t know how it could work out, but when she is not controlled by the idiots who ran her election campaign, Theresa May actually can see that there is real insecurity in the country and something needs to be done about it, while other Tories worry that UC will collapse and public anger will rise against it.

As I said before, I’m slightly pessimistic about the Labour party since Corbyn himself talks mainly about full employment, which is based really on full male employment, and takes no account of caring and other unpaid work. Even if Labour are willing to restart their basic income inquiry from before, there is the risk that it will be swept away again by yet another early election, and after his relative success last time there is little chance that the manifesto, which said very little welfare, and nothing about ending the sanction regime, will change much. The movement behind Corbyn, Momentum, gives us a lot of hope, since so many are very pro basic income. Quite a lot of local councillors from Labour are very positive about the idea, particularly in the north of England where there’s more  poverty and unemployment than in the south.

Dániel: So what if anything can we learn as European basic income activists from these two election stories?

Aurélie: The French example can give a hope for all the countries that it’s possible to be successful with such an ambitious idea. And also that talking to all kind of politicians about basic income pays off: One year before the elections, Benoit Hamon was against the idea – and just one year later he took it into his programme. So we should not underestimate the capacity of politicians to listen.

Barb: I would add that the fact that Hamon was successful in the primaries with the idea actually made other European parties such as Labour view it it more seriously. In the end we really have to think globally and work locally: The whole experience in Birmingham with the mayoral election proved that we have to get more local politicians support the idea and hope that they will move on up at some point. We need to push much more from the grassroots.

Dániel: Well, thank you both for all these interesting insights and ideas.