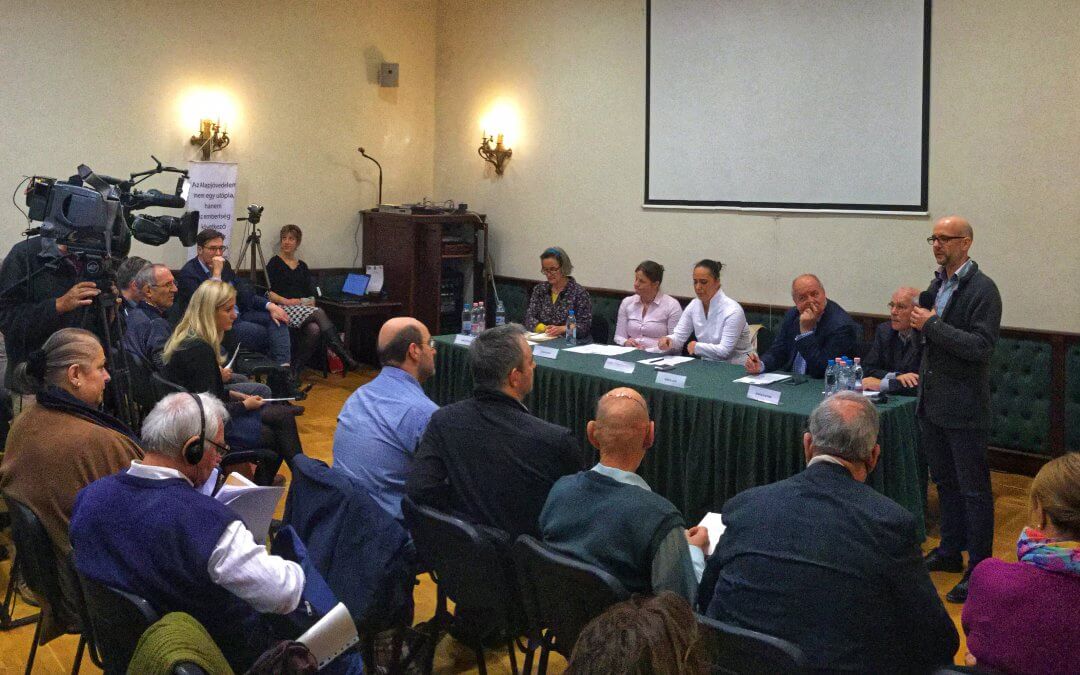 On Friday the 23rd of November a public conference took place at the Hungarian Institute of Political History in Budapest, hosted by the First Hungarian Unconditional Basic Income Association together with the Progressive Hungary Foundation and bringing together members of the Unconditional Basic Income Europe network.  The primary subject under discussion was how to get Basic Income into the public consciousness by taking advantage of the upcoming European Elections in May 2019, but another important issue was the possibility of organising a European Citizens Initiative to have Basic Income considered at the European Parliament.

Network partners came from across Europe for the occasion, and Pressenza took the chance to interview Dániel Fehér, Chair of the Unconditional Basic Income Europe (UBIE).

Pressenza: What is the principal purpose of today’s meeting?

Dániel Fehér: We came here to Budapest today to see where the idea of basic income stands in Europe. We want to take a look at ongoing and planned experiments, see what concrete political proposals we have for Europe, and discuss what we need to turn them into political reality.

PZ: A large part of this meeting is dedicated to the European Citizen’s Initiative about basic income. Has it already been decided to launch the campaign, and what kind of basic income scheme would it want propose?

DF: It’s not decided yet. Tomorrow and Sunday we need to discuss pros and cons, difficulties and chances of such a campaign. The European Citizens Initiative is a mixed weapon. It can address a lot of people, of course. But it also needs lots of resources and organisational capacity. And at the present it is a very weak political tool: Just the fact that you succeed in collecting one million signatures does not force the European Union to do anything.  So we need to discuss how this tool would fit our strategic goals, whether if that is the best tool to promote basic income in Europe and bring it closer to reality. If we decide to do such a campaign, we also need to agree what exactly are we want to demand. There are different proposals on the table. Today at the conference we heard a lot about the idea of a Eurodividend, which would be a partial basic income that all EU citizens would receive. This could be, in my opinion, included in a demand for our campaign. But the idea of our meeting is to first focus at our criteria for a good proposal that allows us to do a good campaign and decide then how we want to phrase our demands.

PZ: In 2013, there was a European Citizens’ Initiative about basic income. Why would you repeat it again, and what didn’t work last time?

DF: The situation is quite different today, the discussion around basic income has progressed a lot. A lot more people know about the concept and support it. We have also more possibilities to reach people. When the European Citizens Initiative was first implemented by the EU, it had a lot of starting difficulties and the campaign in 2013/14 had to struggle a lot with these. We could not collect the signatures during the entire official period of 12 months, for example, because the online signature gathering tool that the EU Commission gave us just did not function properly in the beginning. There is also a reform process going on currently at a European level. This means that at some point in the near future there might be reforms to the ECI, so that it becomes less cumbersome to collect the signatures. We need to take all this into account when deciding about starting a campaign.

PZ: A European Citizens’ Initiative requires you to collect 1 million signatures in at least seven countries of the European Union.  Can your network count on a sufficient number of activists and do you have the necessary support from other organisations and social movements in order to carry out such an activity?

DF: That is definitely a huge challenge. If you say, well 1 million signatures compared to 500 million Europeans, that might not be that much, then you most likely have not tried to collect that many signatures before. We know that it’s not something our activists alone can do. We need allies and that is part of the challenges we are going to discuss: how to plan this campaign, whom to ask to join the campaign, and what could be the reasons for others to join this campaign. We need a big alliance but I think we have also good chances to create that. There are many movements, political parties and other organisations around Europe who could have an interest in bringing this campaign forward for more solidarity within Europe, for a more social Europe.

PZ: And finally, is there a specific reason why Budapest was chosen as the host city for this event, and not a city in countries where the network is more developed like in Germany, Holland, France or Spain?

DF: Well, partially we chose it for practical reasons, because we knew that there are organisations here who are interested in organising this weekend together with us. But it’s also a sign exactly to those countries where the movement is not that developed yet. I think our job as a European network is to support initiatives in countries that need our help and not so much networks that are already strong.