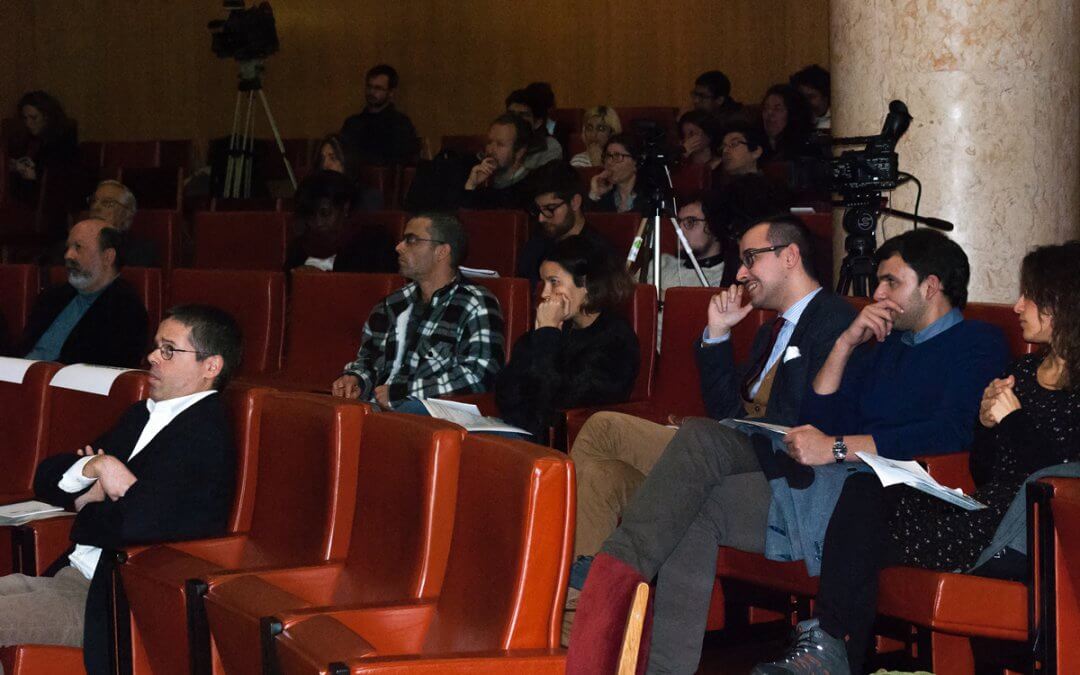 In Febrary 2016, an important conference was held in Lisbon, Portugal, focused on basic income and its implications. Although similar initiatives have occurred in Portugal in the past, this was the first conference of its scale; it brought together national and international speakers, received a large amount of media attention and was organized by multiple partnering organizations: Grupo de Estudos Políticos, the political party PAN (Pessoas, Animais e Natureza), Movimento Rendimento Básico Incondicional – Portugal, Grupo de Teoria Política – CEHUM, and IHC (Instituto de História Contemporânea). This initiative accompanies PAN’s intention to propose, in parliament, a countrywide BI feasibility study.ll

The conference spanned two days, the 15th and 16th of February, and drew an audience of  around 100 people.

Roberto Merrill opened up the session, presenting a theoretical framework for basic income: pre-distribution (instead of redistribution). According to his research, social problems do not derive from the lack of jobs but from restrictions in access to resources. He also listed a range of authors and most prominent publications on the subject.

Jurgen De Wispelaere’s presentation focused on the Finnish BI experiment, which is planned to begin next year. This two-year experiment is aimed at assessing the ability of BI to eliminate the poverty trap and reduce complexity, bureaucracy and costs in social security. According to Jurgen, the fundamental reasons to experiment with BI are to demonstrate its potential, raise awareness and build a political coalition. Finland’s experiment will necessarily have shortcomings, such as its limited duration, sample size and resources, but it nevertheless can be used to study a wide array of effects, such as popular opinion and preferences and the impact of a BI on labor markets, social security and poverty.

The next speaker, Sjir Hoeijmakers, presented the municipal experiments in the Netherlands, which are expected to start by late 2016 or early 2017 and involve at least 90 municipalities. Although there are around 300 municipalities in the Netherlands, the 90 that have already agreed to participate in the study represent more than 50% of the country’s population; thus, there seems to be a strong public support for these initiatives. In his talk, Sjir described the main worries that prompted the experiments: technology replacing jobs, and the complexity, conditionality and lack of freedom under the traditional social security system.

Amílcar Moreira and Pedro Teixeira presented more cautious views regarding basic income, although both were generally supportive. Amílcar warned that Portuguese social politics have historically been very conservative and favorable to the establishment of conditions on social security. Pedro presented a model for financing a basic income of 200 €/month, which he considers politically easier to implement than higher-valued BI proposals. He warned, however, that there would be a need to finance a BI through taxes other than labor (e.g., taxes on property, natural resources and pollution), since labor taxes are already imposing too much stress on the middle class.

The last keynote speaker of the day, Miguel Horta, presented his BI study, according to which higher redistributions occur with higher income inequality. In his model, which is self-balanced and budget neutral, a 50% tax on labor income can finance a 435 €/month BI in Portugal, with 25% of it given to children up to 18 years old. The current labor tax would be replaced, and a few social security programs would be rendered irrelevant, which would leave the fund for a BI only 2200 M € short. Miguel reasoned that this relatively small amount could be obtained from savings in health, security, very high pensions (caps), tightened fiscal collection on high incomes and reduced costs associated with bureaucracy.

After the last keynote address, the audience had time to interact with the speakers, and the political party representatives presented their views on BI. Among the political party representative, Ricardo Moreira of the left-wing party Bloco de Esquerda was the only to clearly oppose BI. Ricardo views BI as a right-wing tool to wipe out the welfare state.

On the second day of the conference discussion continued at the FCSH university campus, with authors André Barata and Renato Carmo presenting their arguments for BI. Renato suggested that an exclusively national attempt to implement BI is too difficult, however, and instead recommended an approach like that proposed by Van Parijs, who calls for an European dividend. José Neves also defended BI, while cautioning activists to avoid purely cost/benefit logic, as if BI were a simple matter of arithmetic. He also called for a wider trust network in society, which comes when one considers every member of society as potentially creative and productive. Mariana Duarte Silva, an arts and co-work manager in Lisboa, also presented her arguments for BI, focusing on its universal nature, although admitted that she learned of the concept only when she was invited to this conference. Another newcomer to the BI discussion was workers’ and women’s activist Lina Lopes, from the union UGT, who found the concept interesting and promising. Lina suggested that BI could start out as a distribution to caretakers (the majority of which are women).

José Augusto Oliveira, representing the workers union CGTP, presented an opposing view of BI. Like Ricardo Moreira, José Augusto adheres to a full-employment ideal and believes that BI would effectively subsidize sloth. António Dores used his speaking opportunity to challenge the way in which social NGOs are managed at present: hostage to conditional financing schemes, which end up wrapped in dubious financial practices if not blatant corruption. Dores also denounced the precarious work conditions within these NGOs, concluding that BI would revitalize NGOs and provide dignity to a host of volunteers who participate in these organizations.

João José Fernandes, CEO of the Portuguese NGO Oikos, delivered an interesting and timely presentation on food (in)security, the main reason the national health service in Portugal is presently under tremendous stress. It turns out, according to Fernandes, that food intake problems are correlated with unemployment, most notably with insufficient income. This trend is aggravated by low levels of education. Fernandes pointed out that, for an average Portuguese adult, the minimum income for maintaining a healthy diet is around 200 €/month. He argued that any BI proposal must take this into account, and that the amount of the basic income must be adequate to cover a healthy diet, in addition to other basic necessities.

Throughout the entire conference, the audience was very active in questioning the authors and speakers, generating a healthy and useful debate about many facets of BI. The event was closely covered by the media, who interviewed for SIC Notícias TV André Silva from PAN and some of the main speakers for publication in newspapers and magazines. (See the list of publications below.)