How can Basic Income activism and research support each other? 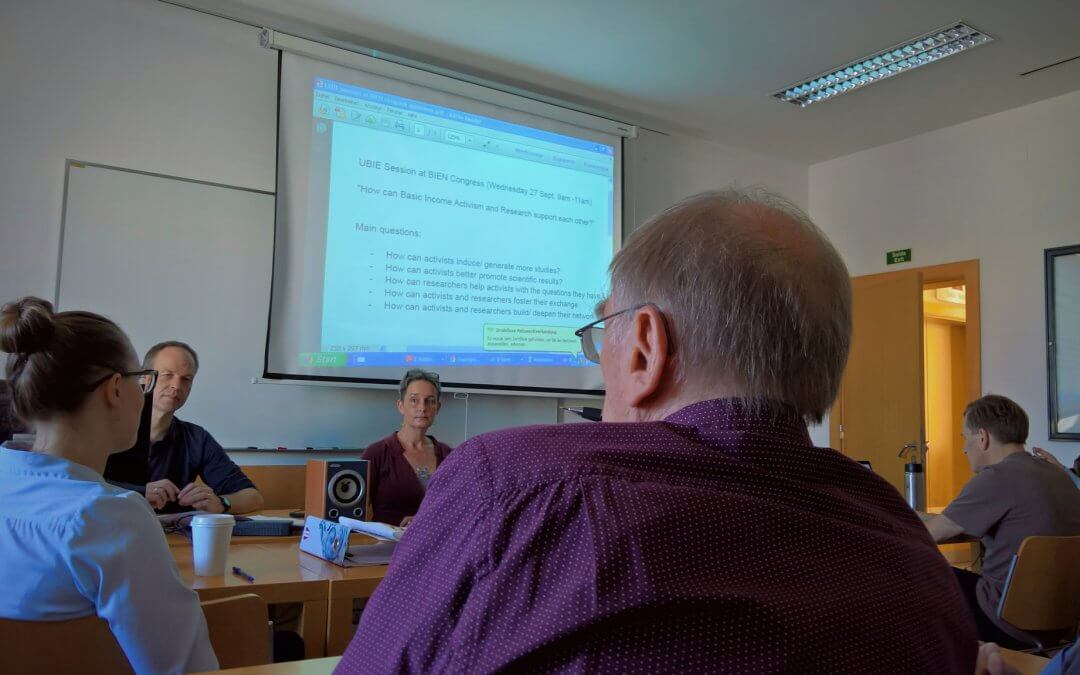 While the two forces compliment each other, they do not always work in cooperation. Academics, for example, have precious knowledge from their research, however, activists understand the public reaction, being “on the ground”, while networking with other organisations, politicians and influencers of the debate.

With this in mind the workshop was split into two workshops, Pilots and General. The Pilots’ group, which included members of the Basic Income Canada Network (BICN) and other Canadian activists, looked specifically at the UBI pilot scheme currently underway in the Canadian province of Ontario. The provincial government announced consultations to hammer out the details of a CA$25 million (€16.5 million) pilot project in October 2016 and the scheme launched this year, following Conservative political strategist and long-time advocate Hugh Segal’s report.
BICN and UBI activists were surprised when the Ontario government originally announced its intention to launch a UBI trial as there had not been wide-spread political discussion or demand for such a move.

A perceived lack of consultation meant BICN and Canadian activists felt they had had little say in how the pilot scheme was designed, although the Ontario government pledged it would make ‘no participant worse off’ there were many details that needed amending when people volunteered to take part.

The scheme also attracted criticism from an influential anti-poverty group Ontario Coalition Against Poverty (OCAP). The group also used the scheme to attack the idea of UBI in general. During the Pilot group’s discussion regarding this attack it was agreed that pro-UBI groups shouldn’t be afraid to make their own critique of pilots and how they often diverge from the kind of UBI promoted by activists. Most UBI activists promote schemes which would be paid on top of services or benefits for special needs and not as a replacement for them (cf. BIEN’s statement on this).

BICN’s statement “The Basic Income we want” is a response to OCAP’s attack. However, it was also agreed that another response would be to gather support from other civil society groups for the kind of basic income activists would like to see.

When the French region of Aquitaine’s UBI pilot was under discussion, for example, UBI activists from MFRB (Mouvement Francais pour le Revenu de Base) were involved in its design, as well as opponents of UBI. This meant that the Aquitaine proposal did not attract the kind of skepticism from other anti-poverty groups in the way Ottawa’s did.

Besides this the discussion raised research needs activists have, including alternative forms of financing UBI, since most of the studies are done as ‘revenue neutral’ (income tax based) and often suggest levels which are too low to live on. Activists also need better information on political structures / personnel they are trying to influence and how best to influence them, and potential allies.

All in all this was an invigorating workshop which raised several issues with research which the plenary on pilots and other workshops did not cover.