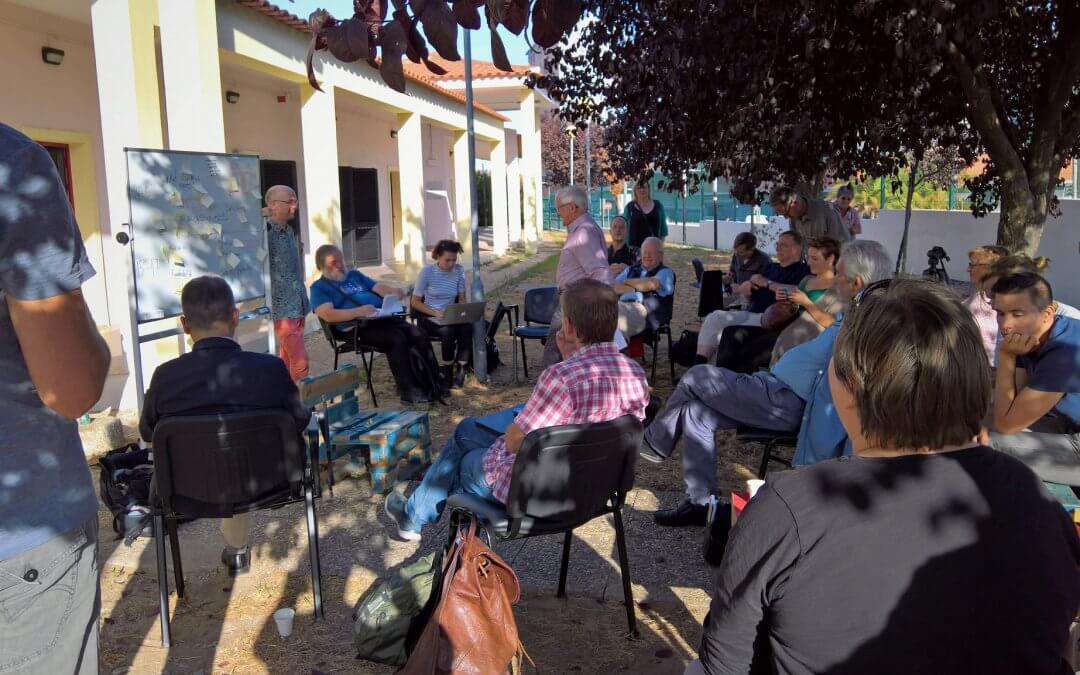 In connection with the 2017 BIEN Congress, Unconditional Basic Income Europe held a General Assembly on 24 September in Lisbon. Beyond discussing organisational issues like on the budget, the relationship to BIEN and the question if we want to introduce membership fees, we reserved plenty of time to look at our ongoing projects in the form of a Create-a-thon, which has already been used successfully at our Ljubljana meeting. Here you can read an overview of what has been discussed and achieved at the various workshops.

In this meeting, a macroeconomic tool calculating the inter-countries redistributive impact of an Eurodividend has been presented by Jean Mansuy. The tool, based on academics’ work, is still currently under development, and is currently developed on a Microsoft Excel worksheet. It has been agreed that having a simplified web interface of this tool on the UBIE website could be of great use and could enable the interested public to play with the number in order to create their own Eurodividend. One of the main questions of this workshop was to think about the possible usage of such a tool and, according to the answers, what could be the next steps of development.

This workshop was organized on the topic of a possible EU Child Benefit. There is a common agreement that this subject could be a good entry point for European lobbying, especially before the European elections of 2019. It could also enable us to get new partnerships with other organizations. Strategically, the focus on children is interesting as ending child poverty should be a moral priority. Children are the future of Europe, we should thus invest in them. It is also a strong tool for a better social cohesion among EU countries, enabling to reduce inequalities and enhance a better wealth redistribution.

Klaus Sambor from attac Austria presented the text for the proposed new ECI on unconditional basic income with the title „START UBI“. The subject matter and the objectives were discussed in detail. The campaign schedule, developed at a UBIE regional meeting of activists from Austria, Hungary, Slovenia and Germany on 21/09/17 in Vienna was also presented. Generally, it was suggested that the final text and the campaign plan should be available already in November 2017 and the UBIE decision on campaign should happen already before the end of 2017, in order to give more time for the preparation of the start.

The topic of correlation between „New ECI on UBI“ and „Eurodividend“ was not discussed in our workshop, because it had been already planned a separate workshop for „Eurodividend“ for Lisbon. The result of the Eurodividend workshop will probably lead to a revised version of the ECI text.

During the workshop about fundraising a letter was finished that could be used as a template to contact different groups or private people they we think have an interest in supporting us.

We had a brainstorming session to collect input for developing an overall communication strategy of UBIE. We discussed our goals and core messages, reviewed our Maastricht strategy paper, thought about specifying target audiences, and looked at preferential communication formats and channels. Based on the outcome, Dániel will compile a draft communication strategy that will be the base for furhter discussion within the network.