UBI for a Brighter Future 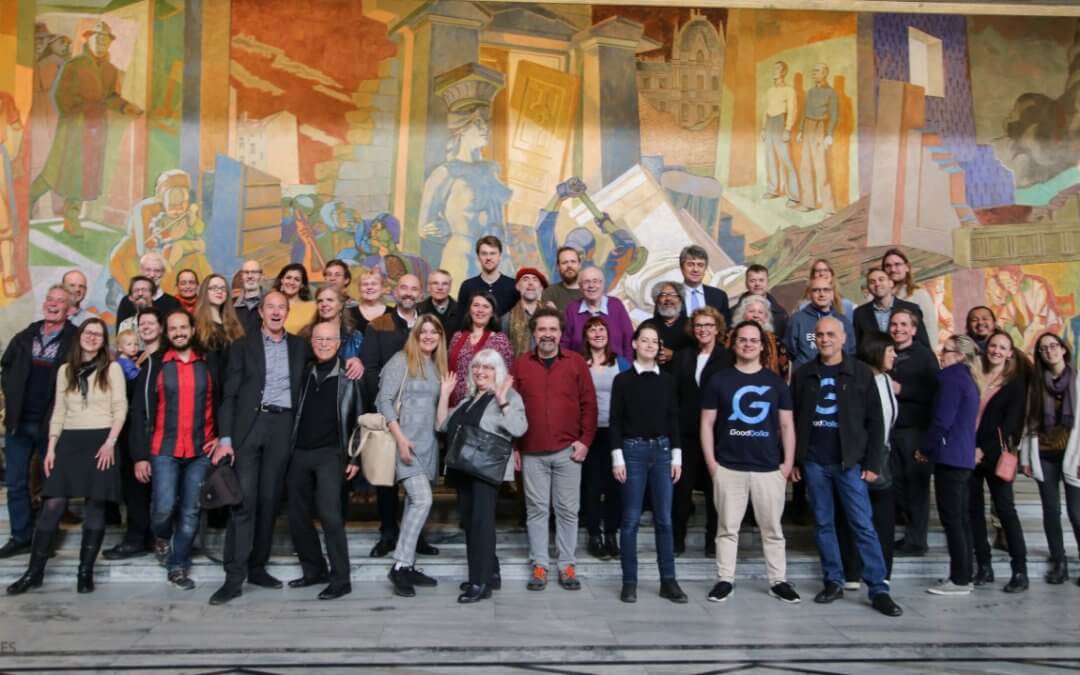 This year’s UBI Nordic conference, “Visions for a Brighter Future” that took place in Oslo on the first weekend of April was a great success.

A UBIE delegation of both “veterans” like Barb Jacobson and Manja Taylor, as well as members of the youth group, Alessandra Bianchi and Antonis Triantafyllakis, were present there among the many scholars and activists of Basic Income.

The weekend started with a reception at the City Hall, the famous place where the Nobel Prize ceremony is held each year, where the guests were personally greeted by the Mayor, a fervent supporter of UBI. During the two following days of conferences and debates, many topics were addressed. What follows is a short overview of what was discussed along with some new reading material and videos for you to dive in and get inspired.

As you might already know, the deadline upon which the SDGs are meant to be achieved is getting closer, without any impressive progress so far. In fact, 2030 is exactly as far in the future as the financial crash of 2008 is in the past! We only have 11 years left to achieve the 17 goals that have been agreed upon by the United Nations.

However complicated one might think it would be to eradicate hunger and poverty, achieve gender equality or ensure access and quality of health services, in her passionate speech, Hilde Latour of UBIE (and Chair of the Dutch BIEN) reminded us that Universal Basic Income could directly fulfil 11 of the SDGs! And she did not stop there, stating that by implementing a global UBI the effects would ripple, helping to cover all the SDGs including reducing the human impact on climate and biodiversity, thus introducing us to the brand new initiative she started together with Lena Stark (Chair of BIEN Sweden), Anja Askeland (Chair of BIEN Norway and coordinator of UBI Nordic) and Sarath Davala (Vice-Chair of BIEN and coordinator of the upcoming BIEN Congress in India), Mission Possible 2030.

The link between UBI and the SDGs is so clear to UBI activists who have studied the impact of the various pilot projects and experiments along the years, that the aforementioned project is not the only one on the matter. Another project has been developing within the UBIE Youth group on the same topic, initiated by Antonis Triantafyllakis and Alessandra Bianchi, aiming to be the largest and most impactful UBI pilot yet!

In an inspiring convergence of realisations and strategies among various sectors, the new project aligns itself with the Agenda 2030, as well as with newly established related EU strategies such as the EU local strategy and the Cohesion Alliance of the European Committee of the Regions and related funds for development such as the European Social Fund Plus and the European Regional Development Fund.

Armed with the aim of those strategies and funds towards achieving the SDGs by taking action on a regional level, the proven contributions of UBI towards the fulfilment of the SDGs and the reality of the various UBI initiatives being easier to implement on a local level, the project 30for2030 aspires to convince 30 municipalities/regions in the EU to implement a UBI scheme for all their citizens for the same period as the aforementioned strategies and funds (2021-2027) and with the same core purpose; to achieve the SDGs by giving the citizens the resources to think globally and act locally!

Solutions for a Brighter Future

In this plenary session, we talked about the future society we want to live in and the solutions that are being developed to reach it. We heard about a promising use of the Blockchain technology by The Good Dollar; the need to reframe a welfare system that is more inclusive, build a real floor under which no one can fall and the “Theory of Ecological Economics” presented by Prof. Ove Jakobsen.

The central argument of ecological economics is that we need to make a shift from the ‘green’ economy, which only focuses on reducing negative symptoms to save the existing capitalistic economic paradigm, to a new economic paradigm rooted in an organic worldview. Only the shift from the homo economicus to the ecological man, from atomistic competition to real cooperation and from the current strategy to a partnership approach will create the new system urgently needed to face the crisis of today’s society (see: Transformative Ecological Economics: Process Philosophy, Ideology and Utopia. Routledge, London).

The Future of Work

Not speaking about work in a Basic Income conference would be like eating soup with a fork; something would feel awfully strange. In this debate, Guy Standing and Scott Santens reminded us of the terribly wrong assumptions prevalent in the society we live in, in which “labour” (as in paid jobs, ⅔ of which are meaningless according to related polls among the workers themselves) has been sanctified and is robbing us from most of our lifetime.

Once again, we were reminded of the urgency to take our lives back by spending more time doing what fulfils us and actually contributes to society rather than what makes profit for just a few (rentier capitalism). Basic Income could help us solve the threat of automation, the unfair treatment of unpaid work, the rise of insecurity (especially felt by the growing precariat) and inequality and help us redefine the balance between life and work by giving both the meaning and purpose they deserve.

Watch:
Santens on the future of work
On the concept of the precariat

In this seminar, Guy Standing, Hilde Latour and Ove Jakobsen outlined an old idea that is starting to come back in trend. It was back in 1217, in a document called The Charter of the Forest, that the idea of balancing the need to preserve natural resources with the human needs present in the area through the protection and shared use of what we can call “the Commons” emerged.

Unfortunately, since then, Standing reminded us that: “The Charter’s fundamental principles, that the Commons should be preserved along with the commoners’ rights, have been abused systematically in the evolution of capitalism, to the benefit of the wealthy and the powerful”. Indeed, from notions like the privatisation of land and natural resources, to intellectual property and patents, up to the emergence of POPS (Privately Owned Public Spaces), we can observe a dramatic contribution to building the current, deeply unfair and unequal, economic system in which we live.

The Commons can take several forms: nature (the air, land, water etc.) social and cultural Commons or even knowledge. Not only we would build a fairer society, by ensuring the Commons benefit the many, we could also create a “Commons fund” with income generated by self-owned technologies and we will be able to fund a Universal Basic Income independent from taxation systems!

Book: Guy Standing “Plunder of the Commons: A Manifesto for Sharing Public Wealth”.

Hilde Latour: “How Self-Owning Autonomous Machines Can Generate a Basic Income for Mankind”.

Many other topics were addressed during the conference: from the crisis of democracy to the debate around automation, from how to communicate UBI to the public to a discussion on pilot projects, the weekend was rich and interesting and we couldn’t have dreamt of a better end than with Sharath Davala’s teaser for the BIEN Congress in Hyderabad!

We thank again the organisers of the UBI Nordic conference and all the wonderful activists present there that left us with a renewed energy to fight for this idea, whose time has definitely come!

This article was written by Alessandra Bianchi & Antonis Triantafyllakis