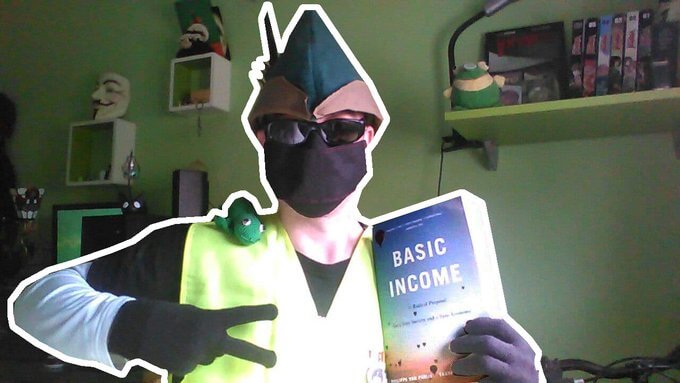 At the of 2020 we asked our readers to imagine a future in which we have managed to make Basic Income happen and describe how life changed as a result. We held a story contest on that concept and asked for your submissions.

We’ve had the chance to read a few wonderful stories on #HowWeMadeBasicIncomeHappen, but we couldn’t choose between the two submissions with the most reactions on social media, so we decided to award both of them with a signed copy of Philippe Van Parijs’ and Yannick Vanderborght’s book “Basic Income. A Radical Proposal for a Free Society and a Sane Economy”!

Read the winning story by Javier “Jusore” Sanchez Bravo below! 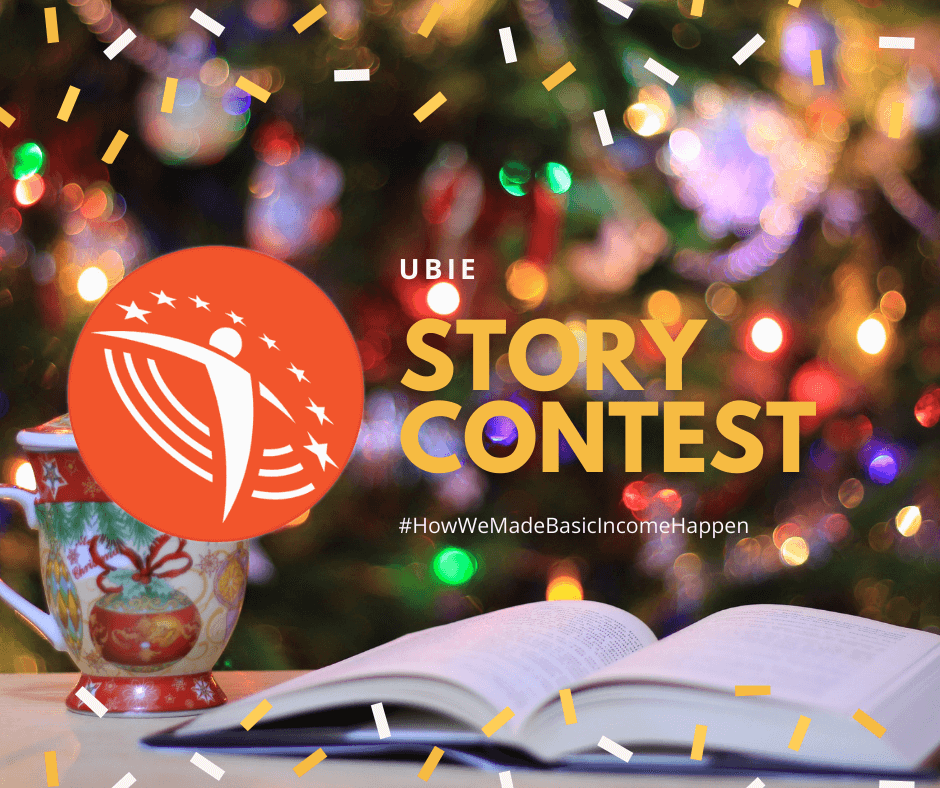 “GM! GM! GM! …” A girl, about fifteen years old, descends the staircase that leads to the upper floor.

“Has she arrived?!” a voice is heard in the background.

The house has curved, organic shapes, colored circular windows and a cozy scent.

“GM!” The girl rushes into her arms and hugs her.

“I’ll be right away!” The voice sounds in the background again.

“Is your mom entertaining?

“Yes, she’s on video call with the community assembly.”

“Sorry!” The owner of the voice appears in the background, with an apparent age similar to the woman who has just arrived.

“I just came to say hello, I have to go back to the video call, as soon as I finish I’m with you, okay?” She feels a bit rushed.

“Sure!, don’t worry, this little big girl and I can manage it.” The younger girl smiles broadly.

“Go Go!” As the mother returns to her meeting, the girl takes GM’s hand and carries her up to her room.

The room is dark, with sheets hanging like a teepee, there is a lava lamp and some funny phosphorescent figures dotting the ceiling and walls.

“You said you’d tell me how the women’s green revolution came about!”

“Already!?, …” the girl looks at her with tender eyes.

“Ooooookay!, what a rush!, hahahaha!”

The little girl seemed to have been preparing the room waiting her to arrive, and her wide and bright eyes accentuated it.

“Hold this. Wherever you want.” The girl passes a flashlight to GM as a relay race witness, so that she begins to narrate.

“‘Wherever you want’, yes?; ummmm, ok…. Life back then was very hostile in general terms, although progress has been made on many issues, nothing to do with what it is now.
Climate change was an undeniable reality, and its effects were increasingly serious.
The economic model of that time allowed monstrous imbalances. Large numbers of the population committed suicide because of depression and other scarcity problems, and for a few to have much, many had to have little.
One of those few, whom few people remember, became obsessed with the colonization of Mars, because at that time, those who amassed resources promoted what we now do together. He, curiously, was in favor of an Unconditional Basic Income model that did not reduce economic inequality. Not everyone thought alike, the mentality that was fostered in competition distorted everything. I might tell you that the labor groups that called companies, competed with each other, ‘reinventing the wheel’, instead of collaborating as cells of the same organism.
The economic and political system were a disaster.
The annihilation of species by humanity did not stop, the lungs of the planet reached critical limits, and the melting of the polar caps increased the water level until it began to make islands disappear from the map and rewrite the coasts of the coastal territories on the maps.
Meanwhile, conscious people suffered thinking that there was no going back, and on the other hand many more people continued their lives frivolizing in the so-called ‘social networks’ and television programs of entertainment and catastrophism.”

“Oh yeah! I read that! They encouraged ego and triviality” interrupts the girl for a second.

“Yes, but then the outbreaks began to emerge from the lands of energy conflict, where the financial interests of a privileged few were trying to continue their toxic fossil energy model.
You know that power corrupts, and that absolute power…”

“Well, those dispossessed women who managed to emerge from the conflict also knew it, and for that reason they stood up and promoted a decentralizing paradigm shift from the municipalities, small territories of what were known as nations.”

“Yes, the divisions that were drawn on the maps” adds the girl.

“Yes, like Mom’s. Those assemblies had decision-making power, official character, and were interconnected. There were different thematic assemblies and also those of women, which at that time we were still immersed in multiple models of submission of which we tried to In short, we were building a Direct Democracy.
But that would not have been possible had it not been for the change in economic focus.
It was then that we began to replace the economy in which paid work was the center of people’s lives, with the economy of self-sufficiency, automation in favor of humanity, basic income and maximum income, land and ceiling that every minimally decent society requires, and later the resource-based economy that we now have.
We put pressure on municipalities to invest their economic capacity in building self-sufficient infrastructure and EarthShip houses, which use renewable energies, hydroponic gardens, closed water cycle, passive energy temperature cycle, recycled materials, local mud and straw (super-adobe, cob, …), etc, to minimize dependence on money (which was mostly spent at the time in paying for housing, food, electricity and water), and in this way we made it possible to implement the Basic Income, from those who were traveling from the economic model until it becomes unconditional, for all people. At the local level, these changes were difficult but possible, while at levels of larger territories, politicians always avoided their implementation from their Representative Democracies or other authoritarian models.
That was the path to Material Freedom that we opened, but had it not been for the path to Immaterial Freedom, none of this would have happened as quickly and urgently as needed, nor would the race against climate change have reached what it is today.”

“Yes. That idea accelerated positive changes like never before. Humanity had never known a liberating media system that rewarded those who did well in such a way, that it enacted the liberating change of general economic well-being and made the law an elaborate good collectively, putting life at the center. An astonishing creative wave emerged, a state of collective social infatuation that made us all feel that we were capable of leaving those dark times and never returning. The dark interests of control for a few were overshadowed.”

“Come on! Let your grandmother rest, she must surely have jet lag from the trip!” The mother has appeared, peering through the door of the room.

“Whoa, okay!, but then you keep telling me, okay?”

“Sure honey” she nods her head and gives her a hug.

We see with camera view vertically ascending the roof of the mud house, full of plants, in which they are, the edible forest that surrounds it within the settlement, the simulated day/night cycle within the dome protected by several layers in the surface of Venus. Its air is not yet breathable, but the atmospheric pressure and temperatures are more similar to Earth; at the moment they are beautiful twins. The camera continues to rise and passes through the clouds, leaving behind the terraforming floating cities and the Venusian space station. We accelerate until we pass close to the Moon, its colonies, the refueling station, the space elevator and the space station, to finally arrive back at Earth, which is now the blue planet again, but greener and full of life than ever. 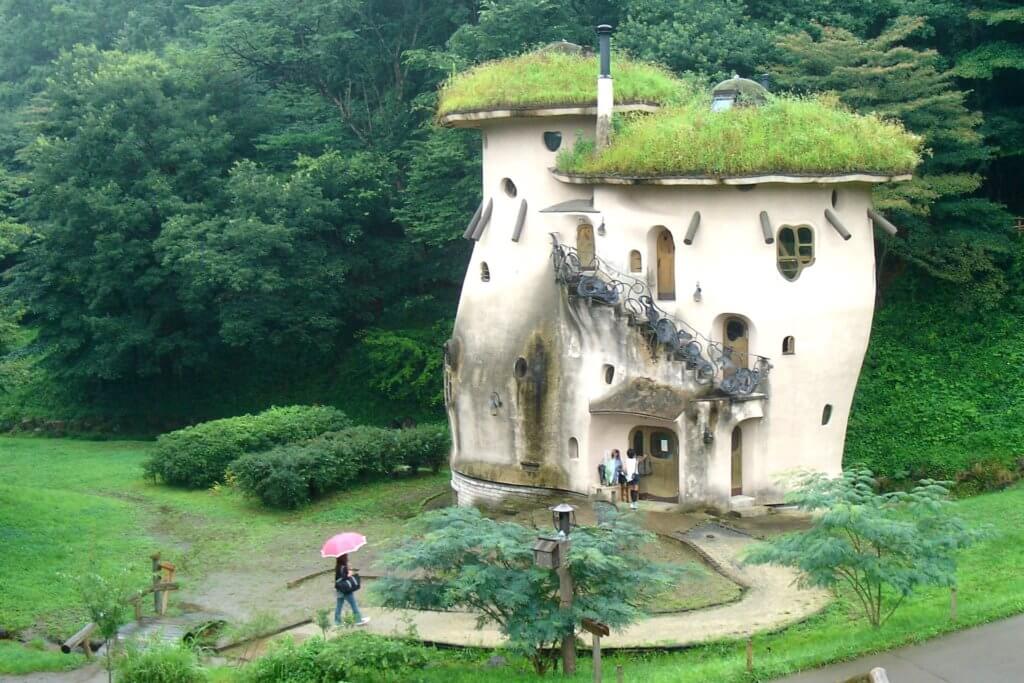 #Note: This story is located in the future of the main story told in the original Spanish ranobe entitled: “Lībreo ⊜ One book to frees you”, which is currently being written (2020).

#License: This story has a Peer Production License.